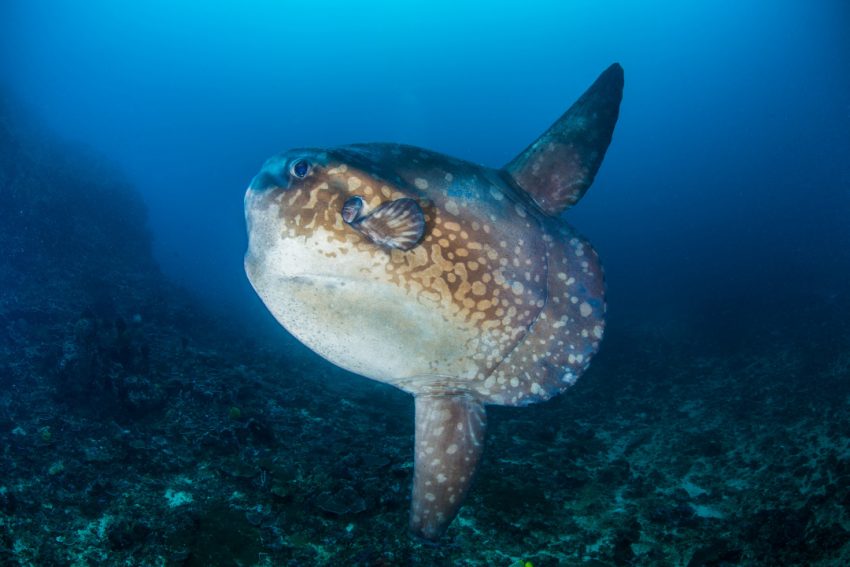 The sunfish is a peculiar looking vertebrate that weighs 1 – 2 tons. The fish is often sought after by divers so they can get a glimpse of this gentle giant. Fun fact about sunfish is that they love to come up to the surface to soak up some sun after they hunt for food in the deep and that’s how it gets its name!

Mola-molas (another name for sunfish) loves to hangout at cleaning stations to get cleaned. The name Mola comes from the latin word that means millstone. They often eat jellyfish, but also zooplankton, squid and small crustaceans. When they come up to the surface, they swim sideways with their side exposed to the atmosphere so that birds will clean its body for them.

Even though there is a relatively large number of mola-molas living in the sea, spotting one is not easy since they live in very deep locations, up to 600 meters deep. The most common way of seeing them is when they come up close to the surface to get cleaned by reef fishes. As long as it is approached carefully and not intimidated, divers can often spend time admiring this fish up close. Be sure you’re being gentle because they’re very shy and do not respond well when divers approach them aggressively with big cameras, flashes, and heavy breathing (bubbles). You might scare them away.

Mola-mola season in Indonesia starts from July and ends in October. It is during this season that mola-molas are often found hanging out at cleaning stations in Nusa Penida waters. When these mola-molas are being cleaned, it is not uncommon for them to stay between 30 to 60 minutes in order to get a thorough cleaning.

Be aware that the water during this time is usually colder. The temperature may drop and consistently gets colder ranging from 18-25 degrees Celsius. You may also experience some thermoclines, sudden and sharp changes in temperature that can go up to 10 degrees lower! The coldest months are usually during August – October. So be well prepared with your dive equipment, maybe wear a thicker wetsuit or add more layers like rash guard, vest, or diving hood.

The weather during this dry season is perfect as it’s sunny and less humid. It’s the peak season in Bali. Be sure to book first for your trip to Nusa Penida with us between July and October to have a chance of seeing and getting your pictures taken with these giant beauties!